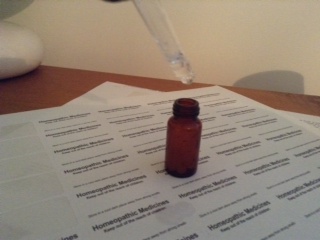 LESS IS MORE,  is the mantra when using homeopathic remedies.    Samuel Hahnemann was trained as a doctor in allopathic medicine in the 1700’s. He was using massive doses of substances in an attempt to bring about cure.  He continued this practice even after he discovered the law of cure but, since he was an exceptionally keen observer, Hahnemann noticed that even though he made cures using these massive doses he was also seeing drug effects.  Drug effects as we know today are the side effects often produced by allopathic drugs.   We even see overdoses when a drug has been prescribed but not monitored well.  Hahnemann was frustrated to see that he was creating illness in the process of trying to help his patients.

This remains true to this day as all allopathic drugs, even aspirin, have side effects.  Many pain killers readily available over the counter are capable of producing numerous problems with the digestive system.  Of course we are all familiar with the long term effects of steroids on major organs such as the liver, heart, adrenal glands, pancreas, etc.  Any drug which is an “anti” drug is more than likely suppressing the body’s natural expression of dis-ease and through this suppression will create “side effects” in the form of organ damage and deeper pathology.   The body sends signals as a cry for help.  How can this be curative?  In fact, as homeopaths we no longer use the word CURE, we are not allowed to do this in order to protect vulnerable people.  Homeopathy is a system of medicine that works towards greater well being, mentally, emotionally and physically.  The consultation itself is therapeutic and may be one of the leading factors in why many clients feel better when they choose homeopathy.  Homeopaths like to work together with your medical professionals as an integrated whole, believing that this is the only way forward.

So, Hahnemann became convinced that there must be another way towards gaining real health.  He began to experiment with reduced doses and discovered the smaller the dose the greater the benefit!  Through repeated experimentation and careful recording of his findings he developed the dose into the infinitesimal.

This is the aspect of homeopathy that is questioned continually by scientists who are trained in reductionist thinking.  According to those who believe only material doses of a substance can bring about healing it is virtually impossible to cure something that has “nothing” in it.  Therefore homeopathy is condemned to be a medicine that purely works on the placebo theory.  The argument is based on the confusion that the material substance is the remedy and that the pathological state (symptoms) is the disease.  In fact the symptoms are only an expression of the dis-ease, which cannot be seen or analysed.  Allopathic medicine has ways of measuring disease with blood tests, etc. but these are not always fool proof and many people will attest to having been ill but being told they can’t possibly be since “nothing is showing up on the tests”.

Homeopathic prescribing then is based on the simple rule that potentised (diluted and succussed) remedies will stimulate the body and mind to find a way forward.  By giving the organism the same disease in potentised form (law of similars) in minute doses you trigger a  response without any toxic effects.  Once this response is observed the remedy is no longer needed.  If the same symptoms return then the same remedy can be repeated, same potency and dosage.   BE PATIENT, that is the best thing to remember.  You are the one who holds the power for your own well being.   Any form of medicine you choose is merely another tool.

When Sue is unavailable please contact KAREN REDPATH either by email: karen@consciousshifts.co.uk or call: 07960 506 677